This season marks the 15th anniversary of hockey in Stockton. Started in 2005 when the Atlantic City Boardwalk Bullies relocated to Stockton and was renamed the Stockton Thunder, the ECHL team (third tier underneath the National Hockey League and American Hockey League) called the portside city home until 2015 when they relocated to New York. The Calgary Flames (who also own the now named Adirondack Thunder) then moved their AHL affiliate to Stockton, renaming the team the Stockton Heat. For four seasons the heat has torn up the ice at the Stockton Arena—a 9,737 seat venue—becoming the second Calgary Flames franchise to call the arena home.

Coach Cail MacLean arrived in Stockton three years ago, a Canada native who played in the Junior League (a place promising players go to high school to focus on hockey away from home) before becoming a coach for the Calgary’s New York state team affiliate. For one year he was the assistant coach for the Heat before becoming the head coach at the beginning of the 2018-2019 season.

While Cail has only been in Stockton for three of the last 15 years, he can’t help but get excited about the monumental anniversary. “Having worked in the ECHL and knowing some of the history behind the Stockton Thunder, I have a lot of respect for the dedication to the hockey teams in this community over these years,” he says. He adds that he looks forward to seeing the Heat become a member of the community as much as the Thunder was, something that doesn’t always happen as you rise up through the leagues. Traditionally, the lower leagues have more player involvement and community interaction, he says, but he sees the Heat—an AHL team—doing what they can to maintain that excitement around the game.

With the transfer of the Thunder to the Heat, the Stockton community gained something new. The AHL is just one step below the NHL, and players from the Heat are often bouncing back and forth between the Stockton Arena and Scotiabank Saddledome, the Calgary Flames arena in Alberta, Canada.“[Fans] actually have the chance to get up close and personal with players that are on the cusp of being big time stars in the highest league in the world,” Cail says.

One of those players is Ryan Lomberg, a fast yet tough player that Cail calls a fan favorite, capable of keeping viewers on the edge of their seats. He’s spent five years with the Calgary Flames franchise, and he’s been playing in Stockton since the team moved here four years ago. “To be able to be here for the 15th season and quite a few before that, its’ an honor to be a part of,” Ryan says. “The fans are great. Really wild and passionate.” 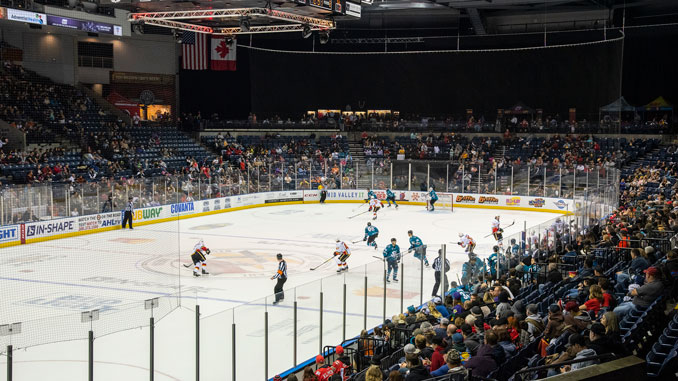 Ryan had a similar path to hockey as Cail, playing in a USA junior league at 16 years old after growing up on hockey in Canada. In Stockton, he’s reveling the experience to play hockey in California where the arena is cool but you can enjoy the outdoors year-round—a far cry from his Canadian hometown. But for him the weather plays second fiddle to the fans, especially the young kids he sees at the arena.

Hockey was a big part of his life growing up. “[In Canada] kids are almost raised in hockey skates,” he says. While he plays hockey, he sees the young faces in the crowd. “You can see the passion [for the game] in kids.”

Aside from the local changes over the last 15 years, Cail says something else is happening to the game of hockey on an international level. Every year Cail notices incremental steps in speed and skill on the ice. “The players and the style of the game just continually gets faster,” Cail says. “It’s pretty exciting that way.” Stockton is able to keep up with the style change through mindful recruiting, picking players who are faster and more skilled in their skates, versus rough and tumble the way the game used to be. “The Heat organization with the help of the parent organization… looks to make sure they stay abreast with [the change] with the quality of player that comes in.”

The Calgary Flames are focused on looking for players that fit this new style of game, and that benefits the Heat because it’s the Calgary’s recruits that land on the Stockton Arena ice. That means the Flame’s selection in the NHL draft dictates the sort of players the Heat are going to get over time. On average, it takes about two to three years before a drafted player is playing for the AHL team. “The game is just kind of changing in my direction,” Ryan says. “It’s a good time for me to play.”

This season, Cail says fans should be excited about the talent on the team. In addition to new players taking to the ice—young guys who are nimble on their skates—the rookies from last year are shaping up into really skilled players, including Dillion Dube who has already seen some time on the NHL ice. “They should be excited for the quality of youth that we have on our team. We have some young rookies coming into the fold that are exciting players,” he says. Plus, a lot of the second-year players have already been on the ice as part of the Flames, bringing new grit and experience to the game, while the rookies are knocking on that door, trying to get a foot into the NHL.