While retirement marks the end of one chapter, it can also create exciting new beginnings, reveal new passions, and in some cases, inspire people to embark on an entirely new career. San Joaquin Magazine spoke to four incredible seniors in our community who are expanding their horizons in their golden years, from doing vital work with nonprofits to starting their own businesses. Through their dedication to pursue their passions and tirelessly serve the community, these seniors continue to shine in their “second acts.” 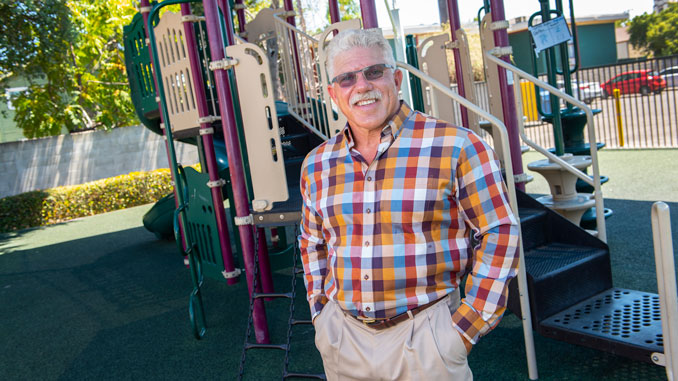 When Ray Call began his career as a firefighter with the Stockton Fire Department, he knew he had discovered a passion for helping others. “It was such a great job, serving the community and helping people. Why would anybody want to do anything else?” Ray shares.

The fire department is also where Ray first got involved with local nonprofits at the recommendation of his boss and mentor, Fire Chief Gary Gillis. “What got me started really was that Gary had coached me,” Ray explains. “One of his philosophies was that, if you’re in the upper ranks of the fire department, you have to give back. He wanted all of his officers to be involved in a nonprofit of some kind.”

For his service commitment, Ray decided to join the Child Abuse Prevention Council, where Gary also served on the board. Within a month, Ray was appointed the fundraising chair. “I knew very little about it,” Gary admits. “But I did it with gusto, and I ended up becoming the president of the board of CAPC.”

Since Ray joined the CAPC, the organization has grown from providing $1 million in services to $18 million. “They were close to closing their doors because they were so far behind. So, it was a very big success there, to turn that around with strategic planning,” Ray says.

After retiring from the fire department, Ray started working toward his master’s degree in organizational leadership, with the goal of running a nonprofit. He hadn’t even been retired for a week when we found the opportunity he’d been looking for: a CEO appointment at United Cerebral Palsy. After five successful years there, Ray retired again, this time hoping to start his own leadership coaching business.

Then the YMCA called.

“Once again, it was my boss from the fire department, Gary Gillis. He called me and said, ‘Hey, our CEO is leaving. Could you come and run the place while we hire a new CEO?” Ray recalls. Ray served as interim director for the YMCA for five months. Then, the food bank called. Then, the YMCA again. Then, the homeless shelter. “I was with each of these non-profits from anywhere to four to seven months to help them hire the next individual. And now they’ve all got really good CEO’s and they’re doing really well,” Ray shares.

Through working with so many local nonprofits, Ray says his experiences have broadened his horizons to all the different types of needs in the community: “My personal motto is to be the best I can be and to help others do the same.” 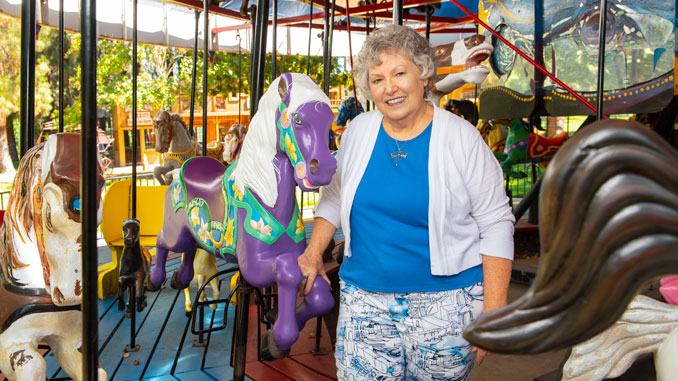 Born and raised in San Joaquin County on a dairy farm in Roberts Island, Mary Pennini fondly remembers attending Pixie Woods Amusement Park as a child in the 1950s. “I’ve always been partial to Pixie Woods because my mom brought us here when it first opened in 1954. It’s like our own little Disneyland,” Mary smiles. “That’s what I like to refer to it as, or the ‘Jewel of Stockton.’”

Before becoming president of the Pixie Woods Board of Directors, Mary worked for the Stockton Chamber of Commerce for 23 and a half years, starting as a secretary and working her way up to membership director and office manager. She says her favorite part of the job was being so connected with her community. “The chamber was the perfect conduit to that because we were involved with all the businesses and all the political people. It opened a lot of doors,” Mary explains.

Mary first became involved with Pixie Woods when she was still working for the chamber. She was invited to a Pixie Woods board meeting, where she convinced the board that joining the chamber would be profitable. But she didn’t join the board herself until a conversation with her close friend—and now vice president—Gae Stewart. “I’ve always had a place in my heart for Pixie Woods. So Gae asks me, ‘Why don’t you come on the board? Since you love it?’ So I started coming to meetings, and sure enough, I’ve been involved for 10 years now,” Mary shares.

Mary says her passion for the park comes from a desire to create more opportunities for children in the Stockton community. “There’s not a whole lot for children to do in Stockton,” she explains. “This is a safe place where they can come and be kids.” In addition to Pixie Woods’ merry-go-round, train, and other rides and attractions, the park also hosts events for families, like the annual “Christmas in July” celebration, where kids can take their photo with Santa Claus, and October’s “Monster Mash,” which provides Stockton children a safe place to celebrate Halloween. Mary and the board also host annual wine and beer tasting fundraisers, although they’ve had to cancel for the last two years due to COVID-19.

Despite setbacks, Mary remains optimistic and grateful for the support she’s seen from the Stockton community. “We have some great donors. There’s a lot of great people in the community that really want to help,” says Mary. “The young kids are our future. We just want to see them continue to get a healthy environment.” 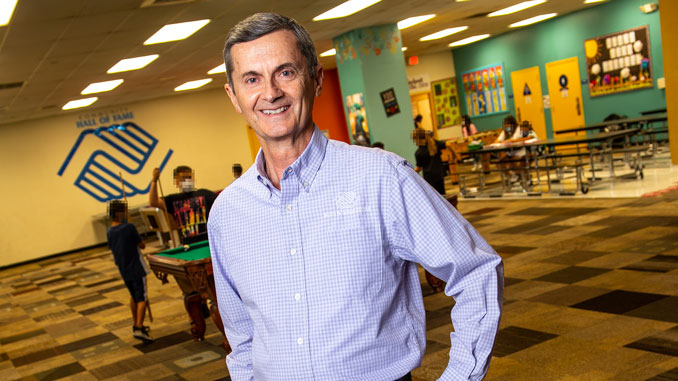 When Roger Coover graduated with a degree in business, he was thinking about law school. Instead, a passion for photography led him to pursue journalism, where he ultimately found his niche in advertising and publishing. “Once I got started in the newspaper business, I enjoyed it so much,” Roger shares. “I loved being able to produce a new product every day. From there, I spent my entire career in newspapers, working my way up through the business side.”

In his last 20 years in the newspaper industry, Roger and his wife relocated to Stockton, where he became publisher of The Record. “My wife and I really liked the fact that it’s a very diverse area,” Roger says. “It’s a good-sized community where you can make a real difference.”

After leaving The Record in 2017, Roger took some time away from work to destress and enjoy his retirement, as well as reflect on his next steps. A religious man, Roger spent time in prayer, hoping for a sign of what he should do next. But the message he kept receiving was simply to be patient.

Then, he got a call from Marty Weybret, a fellow local newspaper publisher Roger knew from his time at The Record. “He came to me and said, ‘The Lodi Boys & Girls Club needs somebody who can help straighten out finances and organization and pull it back together,” recalls Roger. Roger was originally set to help the Boys & Girls Club for just 90 days. He’s been Executive Director for two years now, and says he hopes to continue for many years to come.

Much of Roger’s work centers around networking, raising funds, and providing services that are central to the Boys & Girls Club’s mission. “People have been a great support for this club for over 60 years, and we will need to continue to receive support from the community for the next 60 years,” says Roger.

In addition to providing a safe place for kids to socialize after school, the organization provides access to structured programming that allows students to develop skills in community service, computers, art, and other areas. “The most rewarding aspect for me is when I hear kids say that this club not only changed their life, but saved their life,” says Roger. “Every child deserves a chance to be their best.” 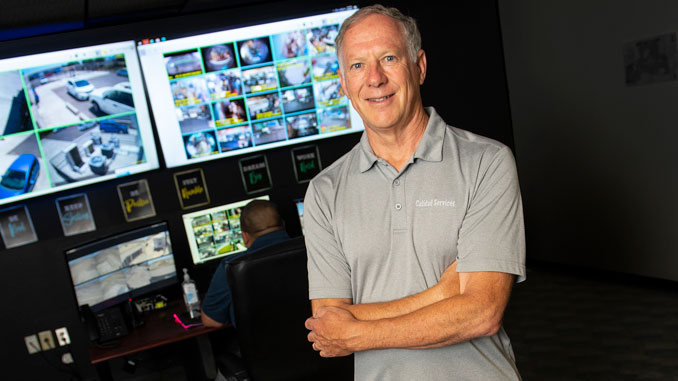 Dennis Smallie knew he wanted to be a police officer since he was a kid, when he would watch Officers Malloy and Reed ride in their patrol car and protect the streets of LA in the 60s-70s TV show, “Adam-12.” “I was like, ‘Okay, I want to do that.’ And then I went on my first ride along, and I knew this is what I wanted to do,” Dennis shares.

After volunteering as a reserve officer in San Diego, Dennis came back to his hometown and joined the Stockton Police Department when he was 21. He served as a police officer for 30 years, working through the ranks to become Lieutenant. Dennis says some of his best years were as a district commander. “You got to know the neighbors and the problems they dealt with, and help them resolve things,” Dennis shares.

While he loved his job, Dennis retired from the force for health reasons, realizing he needed to take a step back after having surgeries for cancer. But while he knew he needed to give up active police work, he soon found another avenue to pursue his passion for public safety: security.

After working for a local security corporation in Stockton for 10 years, Dennis opened up a side business, Calidad Services Inc., which specializes in advanced security technology, like video surveillance with analytics and artificial intelligence. “Calidad means quality. Our model is quality security with a concierge touch,” Dennis says.

Through the business, Dennis says he enjoys collaborating with the police and District Attorney’s office to help stop crime before it happens. He also appreciates the opportunity to work with his son, who assists the business with his entrepreneurship and marketing skills. “It’s so fulfilling to be in partnership with your son,” says Dennis. “I’m able to teach him, and it helps further our relationship.”

When he’s not working two post-retirement security jobs, Dennis stays busy volunteering in the community through organizations like the Animal Protection League and Showered With Love, a nonprofit that provides showers to unhoused people.

Dennis credits his mother as his inspiration to serve the community, who lost everything as a young Jewish girl in Germany during the Holocaust. “She learned, and taught me, how to treat people. And that [adversity] could happen to any of us,” Dennis reflects. “We all have to help each other.”