July marks the 250th anniversary of San Diego. This ocean-side city was once hailed as “the birthplace of California,” after it became the first European settlement on the West Coast in 1769. But San Diego has come a long way, not just in the last 250 years, but also in the last five years. Rediscover neighborhoods throughout San Diego brimming with new hot spots and cultural offerings. While some of the historic gems of the city are still revered, that’s not what this article is about. Instead we focus on the newest aspects of San Diego, including trendy taco joints and hidden bars, most of which have popped up in the last year or two. 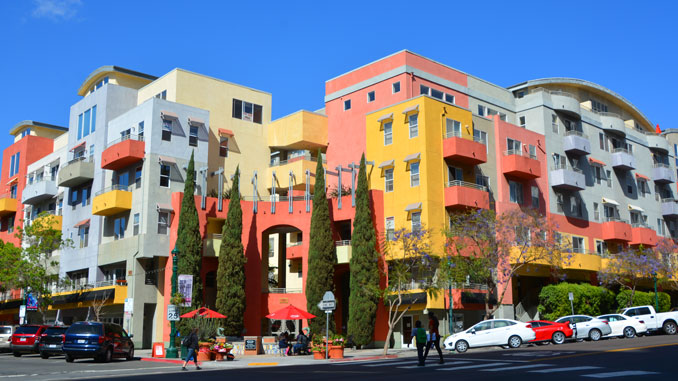 Little Italy is an up-and-coming neighborhood in San Diego, not far from its downtown—coined the “Gaslamp Quarter.” Guaranteed you’ll want to eat and drink your way through this part of town; lucky for you, there are ample places to chill out between meals.

Start your trek under the Little Italy sign and walk the few blocks to get your bearings. Start with a glass of vino at Sogno di Vino, which features a long list of Italian varietals that can be paired with small plates if you’re already jonesing for a bite. 1607 India St.

One way to see the neighborhood is to take a tour through Little Italy Tours (LittleItalyTours.com). Options include a kid-friendly pizza tour where guests sample favorites from pizza spots throughout the area, a cooking and market tour that begins at the mercato (an open-air farmer’s market on Saturdays), or a classic food tour where guests sample the best eats from across Little Italy, all of which taste like they were made by your nonna (whether you have one or not).

For dinner, ditch the Italian and do this weird thing—eat sushi in Little Italy at Cloak & Petal. It may sound strange but bear with us. This sushi restaurant is a barely-lit gem that plays nothing but old school rap music. Comfy booths and long tables sit around a centralized bar flanked by two Japanese cherry blossom trees. The walls don giant pieces of art, including two paintings hung side-by-side, one of Biggie Smalls and one of Tupac.

Dine on traditional sushi rolls of your choosing, but whatever you do, don’t skip the garlic edamame. Cocktails are more reminiscent of the varieties found in hip, downtown bars than your classic sushi restaurant, including the Nick & Nori (a twist on the original martini made with Japanese nori-infused gin) and the Devil’s Advocate (a combination of rum, cashew milk, lime, and peychaud’s bitters). 1953 India St.

Where to Eat Tacos

Tacos in Little Italy? Why not?

Tucked inside the Little Italy Food Hall is Not, Not Tacos, operating under the tagline, “well, they’re not NOT tacos.” Sam the Cooking Guy is the local celebrity behind this offbeat gem featuring combinations of tacos that are, quite honestly, barely tacos at all.

The menu is constantly welcoming new flavors so there is always something different to try. On our trip, favorites included mashed potato, meatloaf, and salmon varieties. 550 W. Date St.

It’s easy to Uber around San Diego, with plenty of rides available at all times of night, but if you want to get around another way, check out the Lime scooters around town. You’ll recognize these brightly colored, motorized scooters in every neighborhood. To use, simply download the Lime app, scan a scooter, and, when you’re done, drop it off wherever you please. 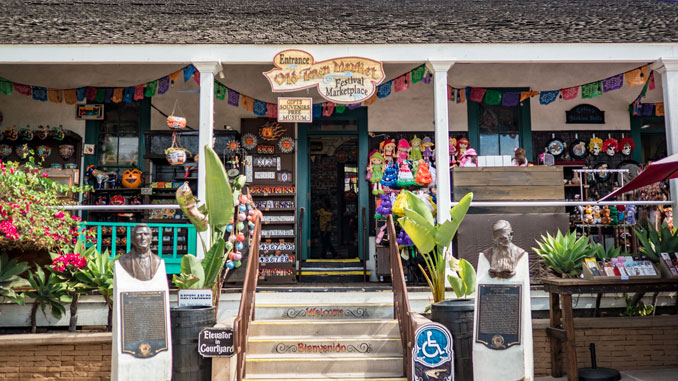 Old Town San Diego is where it all began. This neighborhood was once best known as the home of Mission San Diego, drawing in visitors from all over the country. Today, Old Town still has a hand in bringing in tourists. From its nods to history like the Old Presdio Historic Trail to its lively cantinas and porch-front bars, Old Town has undergone perhaps the city’s biggest transformation.

While you’re here, dine at Tahona, the epicenter of mezcal culture in San Diego. The menu is inspired by Oaxaca, a city in Mexico where much of the restaurant’s mezcal is sourced.

Sip cocktails with dinner (many laced with different mezcal sippers) before moving on to a private tasting. In an adjacent room, those who want to experience—and learn about—mezcal can do so with an expert as their guide. Sit down and run through a line-up of four varieties served with orange slices topped with a grasshopper spice. As you drink, you’ll learn about the intricacies that go along with mezcal making—and we dare you to ask the real question on your mind: what’s the difference between mezcal and tequila? 2414 San Diego Ave.

After dinner, bounce down the street to hit the other bars. There’s a collection of cantinas and open-air establishments here where the party seems to always be going. As you wander, you might just pass some landmarks.

Where to Eat Tacos:

Tahona’s menu isn’t short on delicacies, but when in San Diego, may as well eat tacos! Here guests can enjoy a taco flight—three tacos of your choice from a list of six. Flavors include pork belly negro, chicken tinga, carne asade, market fish taco, camarones a la diabla, and stuffed squash blossom. Pair dinner with a mezcal flight if you don’t plan on the private tasting experience afterward. 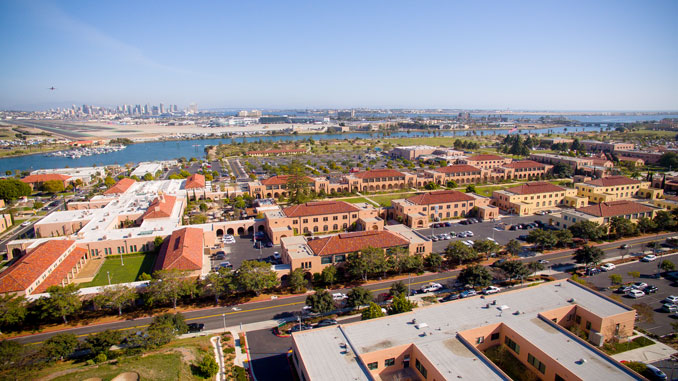 The Arts District Liberty Station is an ongoing project put on by the community (with the help of a dedicated foundation). The efforts started years ago, but many of the renovations are new. Today guests can see more than 145 museums and galleries within the 100-acre park, constructed on an old Navy base. Renovations are still occurring as old barracks are transformed into galleries, coffee shops, gift shops, and more.

Traipse around and immerse yourself in the arts. Behind each door is something new like galleries hosting local works, traveling exhibitions, and community art lessons. Classes in dance are also offered to those of all ages, and even a modern movie theatre takes up residence on the grounds (with a rather extensive list of popcorn varietals for guests).

The district aims to be a center for arts and culture within San Diego, a creative hub for local nonprofits and artists, and a historical showcase that pays honors the city’s rich Naval heritage.

After perusing, stop for lunch at Liberty Public Market. Much like the one in Little Italy, this spot acts as a collective for several restaurants. A large gathering place with a full bar and tap beers is the centerpiece of the market. Through the doors, guests can grab food items from a number of artisan bakers and independent food stops. With a variety of options from Mexican to German, Italian to Thai, it’s the perfect opportunity for everyone to eat what they like.

Our favorites include handmade craft sausage from Mastiff Sausage Company, arancinis from Roma Express, and Argentinean fare from Parana Empanadas. Finish with dessert—cannolis at Roma, macaroons from Le Parfait Paris, and giant cookies at Scooped by Mootime. 2820 Historic Decatur Rd.

Where to Eat Tacos:

Cecilia’s Taqueria is one of the eateries taking up residence inside Liberty Food Hall. Dine on gourmet tacos created atop handmade tortillas before heading into the mess hall to eat.

New San Diego is pushing the trend of speakeasies. Within city limits there are more than you can count on one hand. These hidden bars challenge both locals and visitors to find their private locations. Social media makes it harder to hide for long, but you’d be surprised just how secret some of these bars are.

Welp, lucky for you, word is out—here are some of the best speakeasies in the city, plus directions on how to find them. But shhh don’t spread the word too far.

This place gets crowded, but we know why. The ambiance is nothing but cool. Step in through the restaurant Craft & Commerce (you’ll see a line) and be transported to an underground South Pacific paradise, where the drinks are strong, and punctuated by tiny, paper umbrellas. There’s one sipper on the menu that you can’t miss; you’ll know which one by reading the attached warning—all guests are allowed a maximum of two. 675 W. Beech St.

Grab a table, if you can, and count the hanging skulls before stumbling out of the islands and back into Italy.

Come here for the entrance. Located in the suburban La Jolla mall, Westfield UTC, you enter Raised by Wolves through a spinning fireplace—no joke. When it’s your turn, take a seat on one of the chairs atop the fireplace and get ready to spin. The entire floor turns around until guests land in another room. Step to a table and order a drink. Like many speakeasies, there is typically a wait. 4301 La Jolla Village Dr., Ste. #2030

Realm of the 52 Remedies

It’s a bar within a bar. Inside Common Theory Public House exists one of San Diego’s newest hidden bars. Enter through a frosted glass door printed with the 52 apoethic remedies that opens with the touch of a hand, into a land that feels far from home with strands of hanging flowers and other greenery. Then sidle up to the bar where a team of well-dressed bartenders serves specialty cocktails. The Jade Empress is a favorite; blended green tea, French banana liqueur, fresh lemon, Ming River bai jiu, rum, and salted cream cheese. 4805 Convoy St.

This speakeasy feels more like an underground nightclub than an old-timey bar. You’ll find it through a door hidden in the shrubs (past a parking garage underneath The Melting Pot) where you will instantly be greeted by a sign that reads, “Maybe We Are All Mad Here.” The theme is continued in the décor where 50-year old wine vines and botanical chandeliers make it feel like Wonderland. A large bar cascades halfway around the room, across from a row of semi-private booths. A spinning DJ and a large dance floor take up the rest of the space where large groups bop to the newest hip-hop tunes. 901 Fifth Ave.

In 1769, Mission San Diego charmed visitors and new settlers. It was hailed as the premier place to stay in Alta California. Today, accommodations are handled a bit differently.

This trendy boutique hotel opened in late 2018 smack in the middle of downtown San Diego. The Moxy pulls guests in with an inviting lobby that includes board games, shuffleboard, and comfy places to lounge. It’s chic in an unconventional way; the fitness center is inside a shipping container, the check-in desk doubles as a bar, and the lobby is open to visitors not staying at the hotel. (Pssst there’s a speakeasy hiding inside, too). 831 Sixth Ave.

For the Ocean Lover:

Embrace views of the water—what else did you come to San Diego for?—with a stay at the InterContinental San Diego, a swanky bay-front skyrise featuring roomy suites. On-site dining and a pool make this urban oasis an easy place to stay for those who prioritize both sophistication and fun. 901 Bayfront Ct.

What else is new?

This newly renovated outdoor bar and eatery serves both breakfast and lunch. Pair cocktails with shareable plates or dive in to—you guessed it—tacos. Try the mahi-mahi for something unexpected. Expert Tip: on Sundays a farmer’s market takes up residence across the street. 1004 N. Harbor Dr.

Balboa Park has long been home to some of San Diego’s best cultural offerings. The Museum of Man recently added new installations cool enough for the whole family. Stop in to learn about living monsters, how to make beer, and share secrets with people around the world at the Post Secret exhibit. 1350 El Prado 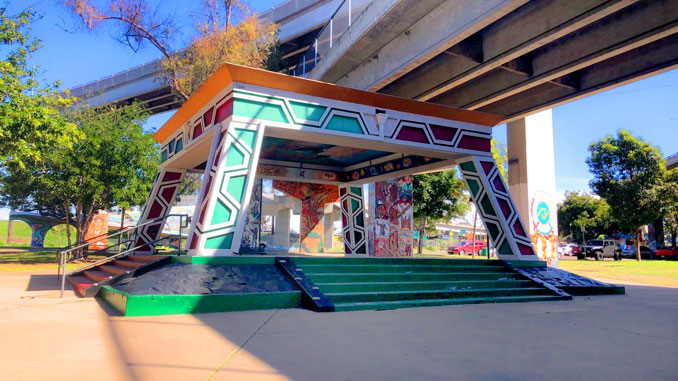 This collection of murals underneath the Coronado Bridge recently became a national historic landmark. It is one of the world’s largest collections of outdoor murals, all with a tie to the Mexican-American culture prevalent in the Barrio Logan neighborhood.