Local residents in elaborate costumes, fans ogling over comic book news, science fiction fanatics gathering to discuss their favorite shows, movies, and games—that’s what StocktonCon is all about, and after a COVID-19-induced hiatus, it’s back for a summer event.

The city-wide celebration is focused on comics, card games, video games, cards, anime, manga, science fiction, toys, television, and movies, while also raising awareness of local San Joaquin County artists. And to add to the fanfare, the event brings in celebrity guests and artists as well as panels, exhibitors, vendors, and more.

One of the best parts of StocktonCon, however, is dressing up—and we’re not talking store-bought Halloween costumers here. From professional make-up to cosplay that look as good as the movies, Stockton residents and others in attendance at the annual event dress to impress. Some are looking to win the cosplay costume contest, while others are upholding a reputation. Most are just there to have fun.

“I only pick character I identify with or absolutely adore, but whomever I choose I make sure I have fun,” says Jacqueline Goehner who has a reputation for dressing up as Princess Zelda as well as Witchblade, Red Sonja, and Dejah Thoris. 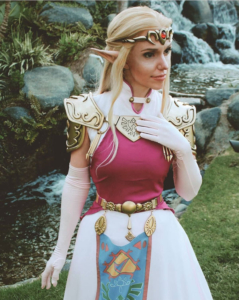 Tim Hurles is known around town as NorCal Cap, for his Captain American costume complete with a matching sidekick (his son). Perhaps most impressive is the work that goes into making the outfits. “Some of it is scratch building and some is taking existing costumes and modifying,” Tim says. “I do all of my own painting and detailing.” Jacqueline does the same. “I make all of my costumes with the exception of two…and props.”

In addition to outfitting his son with a complementary Captain America costume, his wife and daughter have gotten in on the fun in their own Avengers attire. “Part of the reason I enjoy the hobby of costume creation and portrayal is because I can include my entire family,”

“I’m more of a lone wolf,” Jacqueline says. “But I do go with a friend or two occasionally.”

This year attendees can expect more than 200 exhibitors and artists. Guests can also participate in gaming tournaments. As information is confirmed, it will be posted on VisitStockton.org/Events/Stockton-Con and on the StocktonCon Facebook page.

“Being from this area and making such a big impact on the Cosplay scene inspires people locally to be their best,” says Mike Millerick, president of StocktonCon Events.