It didn’t take long for High Water Brewing Taproom & Restaurant to become a local’s favorite spot for sipping brews after work or into the weekend. However, the extravagant and flavorful menu seems to be the eatery’s best-kept secret. If you weren’t aware that your favorite brewery also serves lunch and dinner—well, we just let the cat out of the bag. And if you were expecting a line-up of chicken strips and chips and dip, you’ll be surprised to see what’s actually lurking on this menu.

A baked wheel of brie dripping with fig and bacon compote and topped with roasted garlic and toasted walnuts; oven-blistered shishito peppers sprinkled with lime salt and Parmesan cheese; Moroccan spiced roasted carrot Hummus; a lamb meatball pizza sizzling with pomegranate molasses and caramelized onion sauce, covered in a collection of sweet peppers, fresh tomatoes, purple onions, and cucumber dill Tzatziki sauce, and melting under a pile of feta and mozzarella cheese—these are not the items typically found on a brewery’s menu. At High Water Brewing, however, it’s become par for the course.

One of the positives to come out of COVID-19 was the purchase of a BBQ and smoker. Originally, the plan was to prepare meats for events and catering jobs, but when the menu made a swift change to takeout only, Owners Steve and Barri wanted some heartier family-style dinner additions to their eclectic menu. As a result, High Water Brewing began cooking all of their own barbecue—tri-tip, chicken, and pulled pork, the last of which is the decadent topping gracing the now infamous South Western Mac and Cheese (elbow macaroni coasted in extra sharp cheddar, smoked gouda, and house-made beer cheese fondue before it’s topped with crispy bacon and 16-hour house-smoked pulled pork, chili Verde sauce, lime crema, and cilantro) and also appears in the panini pressed Cubano Sandwich. 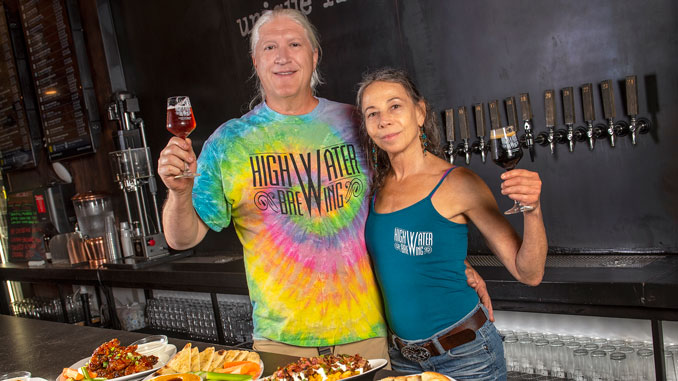 When it comes to pairing menu items with beers on tap, Steve has a few suggestions. The Goat Cheese Spread, a creamy mixture of goat, mascarpone, and cream cheese blended with dried apricots, peaches, nectarines, cranberries, raisins, and more, before it’s drizzled with orange-maple infused honey, apricot preserves, and served with a loaf of warm, sliced demi-bread, is complimented best by a dark beer like a stout or Porter. Or, for those who want to skip the darker brews, the Boom Boom Out Gose the Lights will do it justice. The chicken wings are the most popular dish of all, coming in many style and flavors including Korean, Caribbean-style, NY Buffalo-style, and bourbon and maple-glazed. For any of these, a lighter beer does well. Try the Central Valley White Ale or the Cucumber Kolsch. “They are dry enough they actually combat the oils a little bit,” Steve says. If you’d rather add some heat on your wings, reach for the Hop Riot IPA—the taproom’s most popular brew—to take it up a level. That South Western Mac and Cheese mentioned above is enjoyed best with the Central Valley Red Ale or the Tranquilize Scotch Ale, both with smoky qualities that bring out the smoke on the meats.

“It’s a pretty diverse menu,” Steve says, with something for everyone, including the kids.

Beer & Dessert? What a perfect pairing!

A fresh-baked dark Campfire Stout infused chocolate ganache served with a gooey toasted marshmallow atop graham cracker cookies (and baked inside the pizza oven that is pulling double duty).

Campfire Stout Ice Cream Float
For the 21 and over crowd, this boozy take on a root beer float features a mug of Campfire Stout beer and a scoop of vanilla ice cream.