Like many urban regions, San Joaquin County finds itself riddled with tattoo shops primed for getting some totally rad ink. But when it comes to adding something permanent to your body, choosing an artist shouldn’t be a decision made willy-nilly. Thanks to our dedicated readership, who clearly don’t shy away from body art themselves, we’ve got a list of the top four tattoo spots in the county—and some of the stand-out artists who rep them (thanks to that little annual Best Of list we put together). While tattoo shops still aren’t open (as of press), the artist’s downtime gave us a chance to dig through their portfolios and pick their brains on their favorite styles, their own tattoos, and other little known facts about them.

DISCLAIMER: The photos taken for this shoot are for artistic purposes only. The tattoo artists at the shops listed are adhering to the governor’s guidelines and had not yet reopened to customer’s when these photos were taken. 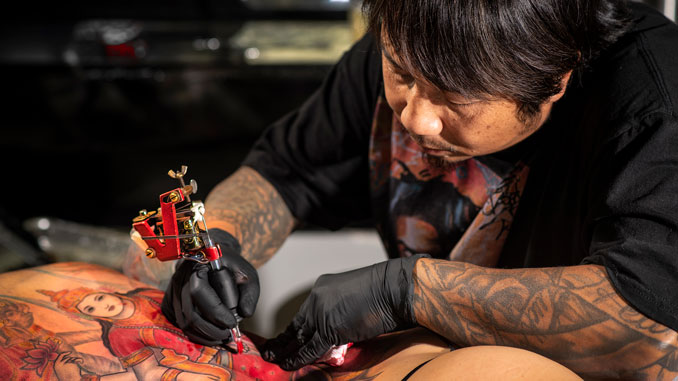 Bao has run Hard Luck Tattoo in Lodi since 1999, two years after he first got into tattooing. // His first tattoo: Bao first got inked at 19, a Buddhist goddess that represents the Vietnamese immigrants that came over by boat. Legend says she appeared in the ocean riding a dragon to rescue people. // Before tattooing, Bao was in school as an art major. // Bao’s style shines in his bold, old-school designs usually drenched in color or muted in black and grey portraits. // What to get: Bao also enjoys tattooing Japanese-style artwork, skulls, snakes, roses, butterflies, and Polynesian-inspired designs. // Where to get tatted: Hard Luck recently burnt down when an abandoned building next to the shop caught fire. They weren’t able to recover much—some artwork, tattooing supplies, books, and awards—but most of the valuables were gone. Bao is awaiting information to decide if the building can be repaired or if he’ll have to set up shop somewhere else. // Pictured: Bao’s wife Trang, who co-owns Hard Luck Tattoo with him (as well as Salon Pure by Trang Nguyen in Lodi), shows off her intricate back piece, designed and inked by Bao. 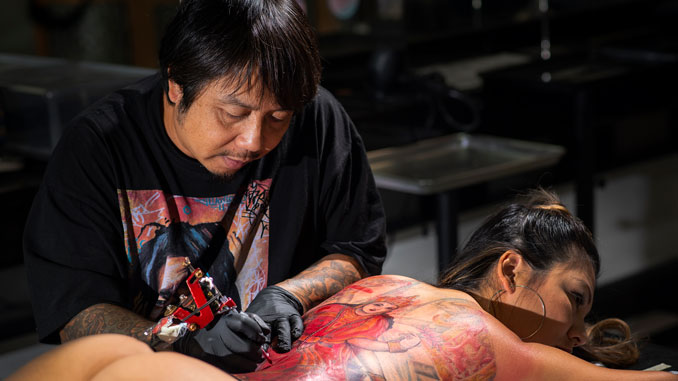 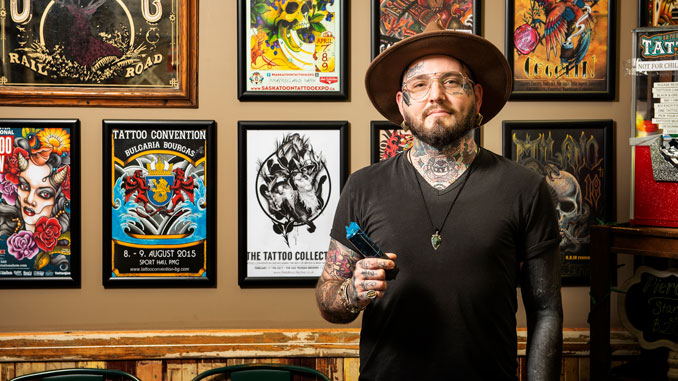 AKA The Space Unicorn. // Casey started tattooing as soon as he could, getting into the profession at 18 years old as a way to explore his interest in and appreciation of art. // Casey is here to entertain, and he’s a self-described eccentric. “I’m just a hipster nerd that needs to calm down.” // As much as Casey loves the artwork, his favorite part of inking someone just may be getting to know them. Casey gets to meet people from all walks of life. “Always  an interesting time entertaining other people in my element,” he says. // His Favorite Tat: Casey has quite a few tattoos of his own, but his two favorites are both unicorns. “I have a three-headed unicorn on my thigh I really love. But I also have my boss naked on a unicorn which is also my favorite.” // What to get: Casey’s favorite aesthetics include neo-traditional and new school designs, as well as black and grey pieces and anything that falls into the realm of realism. // What to ask him: if you find yourself in Casey’s chair ask what him and his cat are currently bingeing on Netflix. And maybe also about why he likes unicorns so much. // Pictured: Alexa, another artist at the shop, who Casey inks. 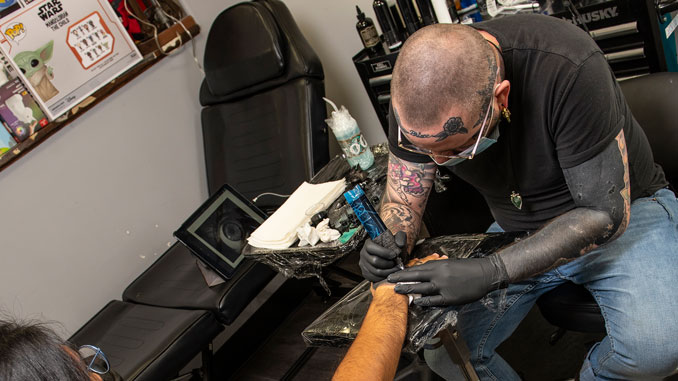 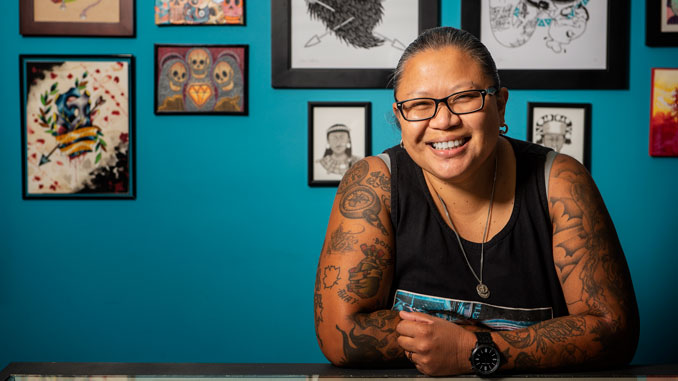 Melissa Santos is the only full-time artist at her self-owned shop, Canvas Tattoo. Located on Harding Way in Stockton, the shop’s interior is simple, but the artwork that comes out of it is nothing short of legit. “I wanted a nice comfortable environment and thankfully I’ve been told that’s what I have by my customers and some passer’s by.” // Melissa broke into the once male-dominated industry despite being told, plain and simple, that there was no room in tattooing for a female. “There weren’t but two I believe between Stockton and Lodi at the time,” she says. // Melissa decided to pursue a career in tattooing after a co-worker caught her drawing at work. More than a typical notepad doodle, the associate offered to make her a tattoo gun if she’d give him a tattoo. // Melissa canvassed the area, stopping into local shops to show off her work and ask the opinions of other artists. Ultimately, she gained a lot of insight and some skill building that allowed her to finesse her talent, including how to make her own needles. “Thank God you can buy them pre made. I burned myself so many times.”  // What to get: Melissa specializes in black and gray pieces. 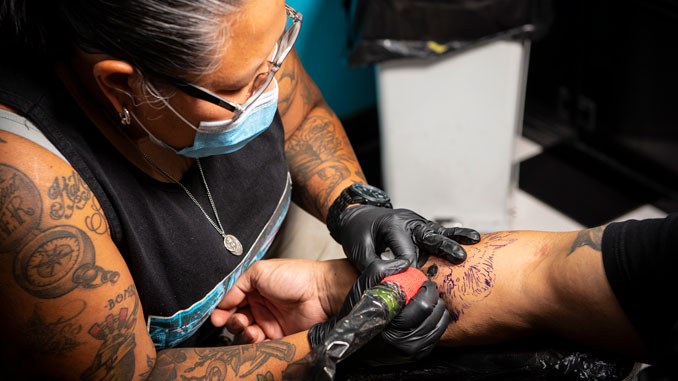 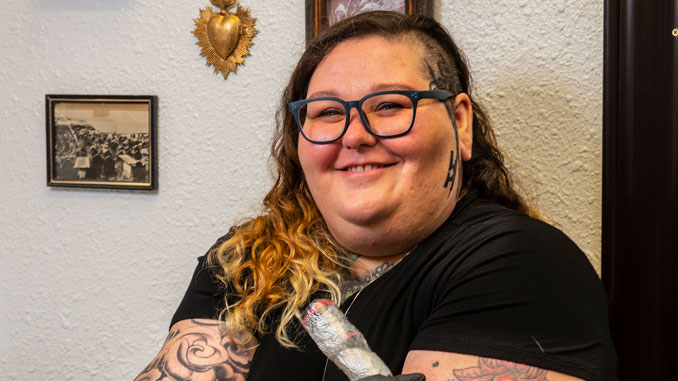 The first person to give Jen a tattoo was Jen. Before she got a foot in the door in 2001, she practiced on herself as a kid and spent a lot of time flipping the pages of tattoo magazines for inspiration. // Jen calls herself nerdy. Outside of tattooing, her interests include anima, horror movies, and video games. “I spend most of my free time hanging out with my dog Maya,” she says. // What to get: Something trendy or a beloved character from childhood. “I love neo-traditional and more illustrative styles of tattooing. I’m really into tattoos that feature pop culture subject matter like movie and cartoon characters or things from video games and anime,” Jen says. // Jen’s gift is taking a person’s vision and recreating it on skin. Connecting with someone and understanding their wants and style helps her create some really gnarly ink. // Standout pieces: Choosing a favorite is no easy task, but Jen has fond memories of completing intricate sleeves. Two memorable pieces she’s done include a waifu sleeve (an anime character) and an Aphrodite sleeve. “Those were pretty fun. I enjoy mythology and the research aspect for sleeves like that. The waifu sleeve is awesome because I just love anime.” // Pictured: The shop manager at Emerald Tattoo shows off some of his Jen-made ink. 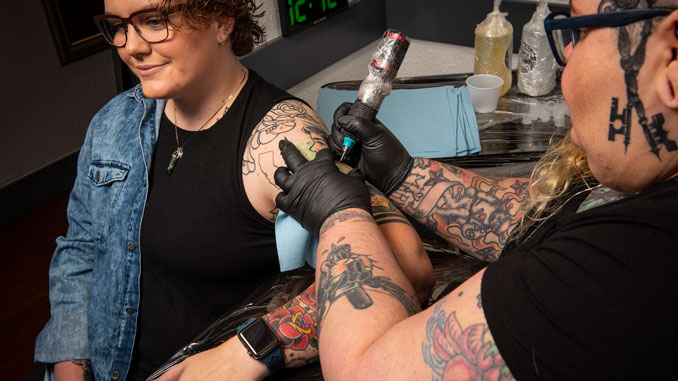